There are tens of thousands of winterized homes and cottages that remain vacant thought the off season here on Cape Cod. While draining down all the plumbing fixtures, turning off the water and shutting off services like electricity to your vacant home over the winter mitigates some risk due to heat failure and frozen pipes, there are a few other problems that can only be mitigated by periodic physical property inspections.

One obvious problem that can be a threat to a vacant property is crime. Past crimes like breaking and entering, burglary and vandalism are often discovered months after they have taken place at some point over the winter.

A number of years ago in Dennisport, every single house on one road got broken into. Many of these off-season crimes go undetected for weeks, or even several months.

Since these seasonal homes are often breached by criminals via kicking in a door, or a breaking a window, the two legged threats may end up making way for the four legged threats… 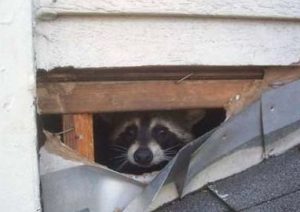 Another threat to vacant homes that happens often but is rarely discussed is animal damage. I have lived on Cape Cod for over 40 years and have heard many stories of animal damage to vacant properties.

Here’s one scenario. During a storm, a branch is blown off a tree near the house. The branch breaks a window. At some point over the next few months, a family of raccoons moves into the home for the remainder of the off season and trashes the place. Scratching up everything and leaving their “marks” all over the place.

You might say that doesn’t happen often, but you’d be wrong. It is actually a quite common occurrence every winter here. Animals can breach the house via the chimney, a gable vent, a broken window, even an open door…

During the very snowy winter of 2015, a call came in over the police scanner that someone reported the front door open on a summer house in Harwich about a week after the first big blizzard. The caller stated that they had seen dogs going in and out of the open front door.

The responding officer reported that they door had blown in and the living room was filled with snow. He also reported that there were several sets of canine tracks going to and fro in the doorway. Sounded to me like a pack of coyotes may have decided that this open door meant they had a free winter rental…

Now, there is no way to know whether this house’s door was blown in by the wind, or kicked in by a thief. No matter what happened to the door, at the very least the house sustained damage from the snow filling up the living room and also likely suffered animal damage as well.

There are lots of outside animals that love to make their home in yours. And they will absolutely destroy your house if given the opportunity. But it often comes as a surprise to people that a property policy doesn’t offer coverage should an animal get inside your house and wreak havoc. — via Animal damage isn’t covered by your property insurance policy

Some insurance policies will cover animal damage as vandalism, since technically the animal vandalized your home. However, if your house was vacant for an extended period of time, like all winter, your homeowners insurance may not cover the damage repair costs.

The reason is that in most cases, the damage must have occurred in a single, identifiable event, not over a time period where you could have taken some kind of preventive action. So in other words, if animals are ruining your second home over the course of several months, the insurance company may not cover you since the damage could have been mitigated by having a licensed property check service checking on your house periodically.

Keep your vacant property safe from two and four legged critters by adding your winterized property to one of our security patrol routes.

Call 774 383-2030 or email us about our property check services, or order a patrol check for your property right now.