Though it isn’t as bad in the US as it is in Europe yet, theft of renewable energy equipment, mainly solar panel theft, is on the rise worldwide.

Most solar farm projects are located in remote areas, where land is affordable and the sparse population provides easier acceptance, permitting and operation. Unfortunately, these remote locations are vulnerable to attacks of vandalism, theft and terrorism. Today, there is an alarming increase in the incidents of theft and damage to solar farms, which impacts the production of electric power.

The criminal element is composed of separate individuals and organized groups. In 2009, they committed 17,494, 717 crimes against property, theft and burglary, according to the FBI.
…
Today’s criminals do not yet understand the value of individual solar components. The components are in remote locations, cover vast areas of land, are easily unbolted, unplugged and transported, and are highly valued for their ability to be resold and installed in other energy producing venues.

Once the criminal element discovers this new opportunity, we foresee a rush to exploit the inherent security weaknesses of solar farms. In fact, many solar farms do not even employ a perimeter fence surrounding their assets.

Another issue that is critical in the protection of a solar farm is that a few collectors stolen from an array can greatly affect the array’s overall performance. Large solar farms are composed of smaller sections or strings of collectors. These collectors are connected in series, so if one collector is missing, an entire section or array put out of service. via Solar farms: The next attack targets (2010)

While large ground mounted solar arrays are an easier target for thieves, solar panels mounted on roofs of houses and buildings are not immune to theft.

Solar farms face a unique set of security risks and are increasingly being targeted by thieves. With solar farm theft on the rise, property owners investing in solar energy farms are beginning to take the security of their PV system sites more seriously.

A new wave of thieves has found solar panels attractive for the same reason that many homeowners are turned off by them: they’re quite expensive. And, unlike jewelry and other valuables, solar panels are conspicuously strewn about the home’s exterior, blatant as billboards, Solar panels are easy targets for thievesand often unprotected. In Europe, where the solar industry is more firmly established, security measures are standard. But in the United States, especially in California, thieves have caught this new market completely off-guard.

It takes some know-how to remove solar panels without damaging them, but savvy thieves are learning fast. They’re even taking advantage of technological advancements, such as Google Earth, to pinpoint solar-clad properties, especially in remote areas where their actions are likely to go unseen. via Solar Theft – NACHI

Now that green energy development has been in high gear for several years now and there is a growing used solar panel market, PV equipment theft is on the rise in Europe.

A UK solar farmer who had 192 solar panels stolen in one of the largest thefts seen from a field-mounted array, says he fears farmers are falling victim to a growing black market in green energy.

“My advice to other farmers is put security higher up your priority list. There is no scrap value in solar panels and if you go on the internet you can find them for £50-£100, so half price. There’s obviously a developing market and I just wonder if this might be the start of a crime wave.“ via Thieves nab 192 solar panels from field, worth £29,000

Here is a chart from Germany, where solar panel theft is climbing rapidly. 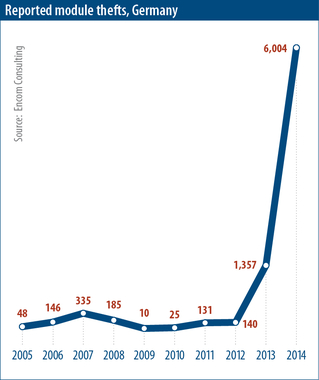 With neat rows of modules set against blue skies and sometimes-spectacular natural landscapes, a PV power plant can be an arresting sight. A visually unfortunate, but important, part of that image is perimeter fencing and a security vehicle either patrolling the fence or idling by the entrance. Protecting components from theft -PV Magazine

More on the increasing theft of solar panels and equipment from California:

Police departments in California — the biggest market for solar power, with more than 33,000 installations — are seeing a rash of such burglaries, though nobody compiles overall statistics.
…
Ken Martin Jr. lost 58 panels from the roof of an office building he owns in Santa Rosa, Calif. He estimated they would cost $75,000 to replace.
…
For Tom McCalmont, president of Regrid Power, a solar installation business near San Jose, the problem hit home in late June. His own headquarters was struck by thieves, who took more than $30,000 worth of panels from the roof. via The New York Times (2008)

Since renewable energy projects are most vulnerable during the construction phase, security for the site should be the first thing that is considered. During construction, there is no pre-theft disassembly required and new solar panels are easier for thieves to get rid of.

There have been cases locally here on Cape Cod, where brand new solar panels have been stolen during the construction phases of solar arrays.

Because speed of installation has been a necessity for many farmers looking to use their land for solar panels, security has often taken a back seat. As a result, thieves are taking advantage.

In the first quarter of 2015, NFU Mutual reported that they had seen a sharp rise in solar equipment theft. Farmer’s Weekly also reported that a Lincolnshire grower had 192 solar panels stolen in June, with another in Derbyshire seeing 100 stolen in March.
…
Make security a priority when you start to plan you solar farm installation. Many solar farms experience theft before they are energised because security measures haven’t been in place from the word ‘go’. Complete a full risk assessment before the installation is started. via Solar farms called to improve security

Most large scale ground based solar farms will employ at the very least a perimeter fence to discourage unauthorized access. For solar sites without perimeter fencing, alarms or video surveillance, security patrol services are often used to patrol and inspect the installation either from a vehicle, or on foot. Security patrols offer an affordable high security option for unsecured solar installations.

Some large commercial solar array installations also utilize surveillance camera systems with motion detection software that will send alerts during a security breach. Many large commercial solar farms have gone as far as using infrared and radar intrusion detection systems. These alerts will notify the monitoring center of an intrusion and then a physical response from a security patrol service will be dispatched to check the site for theft and vandalism issues. If necessary, the security patrol unit can also act as a key-holder and allow locked gate access to law enforcement if a crime is, or was being committed.

We employ only the best patrol agents to work in some of the most remote locations across Cape Cod. We have an excellent track record and are rapidly becoming the preferred security provider for the local green energy industry.

Renewable energy companies have particular security requirements to protect both the high capital value of the infrastructure and security of their contribution to the energy supply.

All Cape Patrol offers a full range of protection services designed to safeguard your valuable renewable energy generation assets. We can guard your infrastructure and ensure that your valuable assets stay safe and secure.

Our range of 24/7 security patrol services is designed to protect and secure all kinds of property, which makes us the perfect choice for your security needs. All Cape Patrol’s mobile security patrols can regularly visit renewable energy sites to protect these assets cost effectively.

Contact us today and find out how our mobile security patrol services can help secure your renewable energy investment.